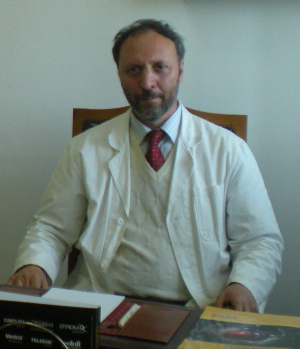 In 1979 he graduated in medicine and surgery at the Catholic University of Milan, based in Roma Pol. A. Gemini.

In 1983 he obtained the specialization in Neurology at the same University.

In 1988 he perfected in History of Medicine at the University of Rome “La Sapienza”.

In 1992 he graduated from the four-year course of Bioenergetica Medica (Homeopathy e Acupuncture) at the International Center for Integrated Medicine in Bologna.

In 1994 he obtained the diploma of the Triennial Course of Homeopathy and Homotoxicology organized dall’AIOT (Italian Medical Association of Homotoxicology).

Study traditional Ayurveda at the Cilus center and Ayurvedic massage with the Master Govindan obtaining the consequent final certificates.

In 1996 he attended Bach II Bachelor’s degree in Bach’s Florenerapy Center of London.

In 1996 he graduated in Philosophy at the University of Siena discussing a thesis of Philosophy of Medicine.

In the academic year 1999/2000 he obtained a four-year diploma of specialization in Biotipology and Homeopathic Medicine at the School of Holistic Medicine of the University of Urbino.

In 2003 he perfected in Therapy Gerson at the Gerson Institute in San Diego (USA).

In 2004 he perfected in Psycho-Oncology at the Catholic University of Rome.

In 2006 he completed the three-year course of Clinical Phytotherapy at the University of Tuscia Viterbo.

He is a member of Sitec (Italian Society of Chelating Therapy)

He practices the free profession in the MnC (Non Conventional Medicine).

He has numerous publications in magazines on topics related to natural food, holistic medicine and the philosophy of medicine